A Brief Overview Regarding Heat Engines

The controlled expansion of gases forms the basis for the majority of non-electrical rotational engines in use today. These engines include reciprocating, rotary, and turbine engines, and may be driven by heat (heat engines) or other forms of energy. Heat engines may use combustion, solar, geothermal, nuclear, or other forms of thermal energy.

Internal-combustion reciprocating engines convert the expansion of burning gases (typically, an air-fuel mixture) into the linear movement of pistons within cylinders. This linear movement is then converted into rotational movement through connecting rods and a crankshaft. Examples of internal-combustion reciprocating engines are the common automotive gasoline and diesel engines.

Internal-combustion turbine engines are often used as thrust engines, where the expansion of the burning gases exit the engine in a controlled manner to produce thrust. An example of an internal-combustion turbine/thrust engine is the turbofan aircraft engine, in which the rotation of the turbine is typically coupled back to a compressor, which increases the pressure of the air in the air-fuel mixture and markedly increases the resultant thrust.

If the fuel used is a typical hydrocarbon or hydrocarbon-
based compound (e.g., gasoline, diesel oil, or jet fuel), then the partial combustion characteristic of internal-combustion engines causes the release of a plethora of combustion by-products into the atmosphere in the form of an exhaust.

In a Rankine-cycle engine, fuel is burned in the combustion chamber and used to heat a liquid at a substantially constant pressure. The liquid is vaporized to become the desired gas. This gas is passed into the engine, where it expands. The desired rotational power is derived from this expansion. Typical external-combustion engines also include reciprocating engines, rotary engines, and turbine engines.

External-combustion reciprocating engines convert the expansion of heated gases into the linear movement of pistons within cylinders. This linear movement is then converted into rotational movement through linkages.

The conventional steam locomotive engine is an example of an external-combustion open-loop Rankine-cycle reciprocating engine. Fuel (wood, coal, or oil) is burned in a combustion chamber (the firebox) and used to heat water at a substantially constant pressure.

The water is vaporized to become the desired gas (steam). This gas is passed into the cylinders, where it expands to drive the pistons. Linkages (the drive rods) couple the pistons to the wheels to produce rotary power. The expanded gas is then released into the atmosphere in the form of steam. The rotation of the wheels propels the engine down the track.

External-combustion rotary engines use rotors and chambers instead of pistons, cylinders, and linkage to more directly convert the expansion of heated gases into rotational movement.

Nuclear fuel is "burned" in a combustion chamber (the reactor) and used to heat water. The water is vaporized to become the desired gas (steam). This gas is directed against a turbine, which then rotates. The expanded steam is then condensed back into water and made available for reheating. The rotation of the turbine drives a generator to produce electricity.

Because external-combustion engines do not themselves encompass the combustion of fuel, they may be engineered to operate at a lower pressure and a lower temperature than comparable internal-combustion engines. This in turn allows the use of less complex support systems (e.g., cooling and exhaust systems), and results in simpler and lighter engines for a give power output.

Similarly, reciprocating engines require linkage to convert linear motion to rotary motion. This results in complex designs with many moving parts. In addition, the linear motion of the pistons and the motions of the linkages produce significant vibration.

This vibration results in a loss of efficiency and a decrease in engine life. To compensate, components are typically counter-balanced to reduce vibration. This results in an increase in both design complexity and cost.

What is needed, therefore, is an external-combustion (heat source) rotary heat engine that maximizes and utilizes the adiabatic expansive energy of the gases (Rankine heat cycle), combined with a reactive-turbine force (Brayton cycle).

The Fibonacci Rotary Expander Vane Engine  (FE) meets all these criteria and more.

This Engine can be easily adapted for use as the Prime Mover in a Solar-assisted Electrical  Generator System. This can also be accomplished by using a parabolic solar concentrator and Fresnel Lens, which would provide the main heat source for a “vapor generator”.   This can be a closed-loop system. 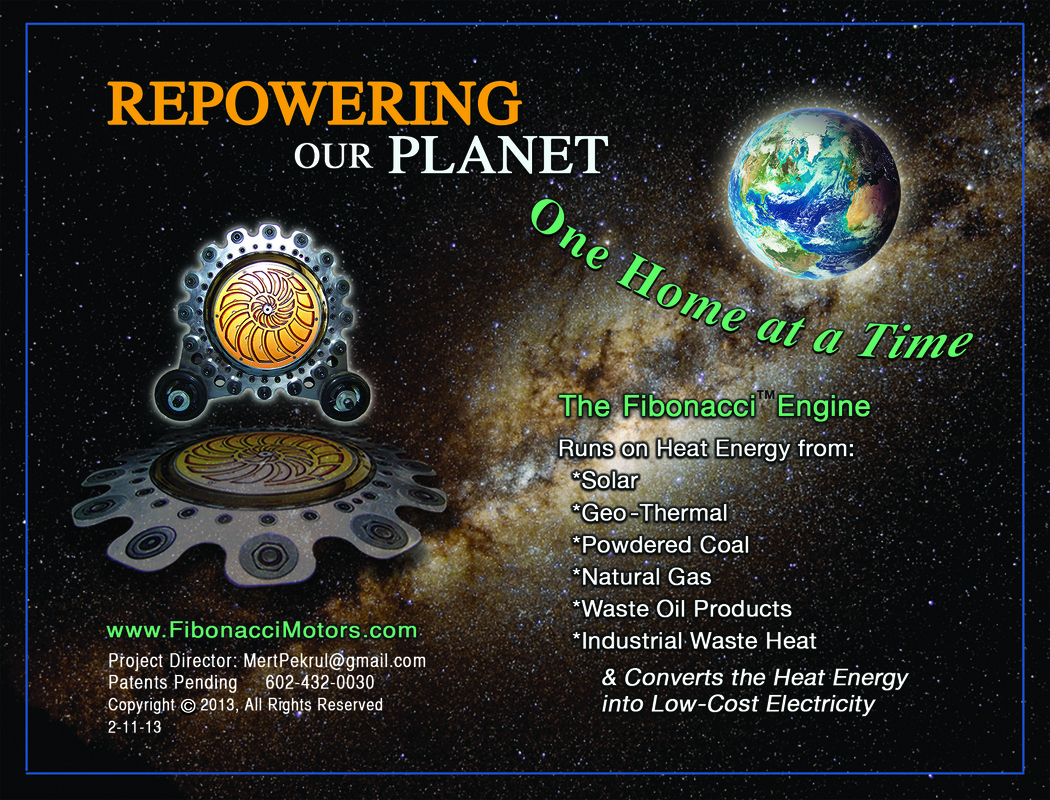